Pandarus is a GIS software toolkit for regionalized life cycle assessment (LCA). It is designed to work with brightway LCA framework, brightway2-regional, and Constructive Geometries. A separate library, pandarus-remote, provides a web API to run Pandarus on a server.

In the context of life cycle assessment, regionalization means the introduction of detailed spatial information for inventory activities and impact assessment characterization maps. As these will have different spatial scales, GIS functionality is required to overlay these two maps. Pandarus can do the following:

The outputs from Pandarus can be used in LCA software which does not include a GIS framework, thus speeding the integration of regionalization into the broader LCA community. There is also a conference presentation video introducing Pandarus and its integration into LCA software.

Pandarus is open source under the BSD 3-clause license.

In addition to this documentation, there is also a Jupyter notebook usage example.

The main capability of the Pandarus library is to efficiently and correctly intersect the set of spatial features from one vector dataset with the spatial features from another vector dataset. In regionalized life cycle assessment, the first dataset would be inventory locations (polygons, lines, or points), and the second dataset would be regions with site-dependent characterization factors. 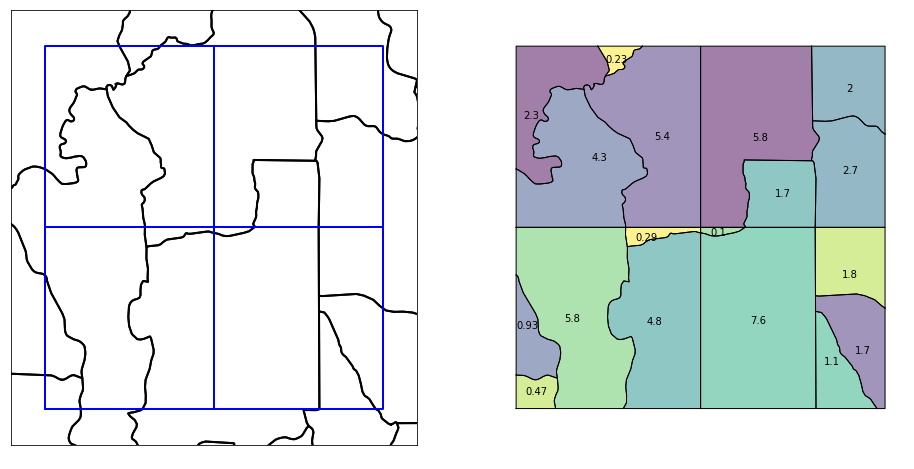 The first spatial input file must have only one type of geometry, i.e. points, lines, or polygons, and excluding geometry collections. Any of the following are allowed: Point, MultiPoint, LineString, LinearRing, MultiLineString, Polygon, MultiPolygon.

The second file is an extract of some of the feature fields in the JSON data format. This is used by programs that don’t need to depend on GIS data libraries. The JSON format is:

Projections through the calculation chain¶ 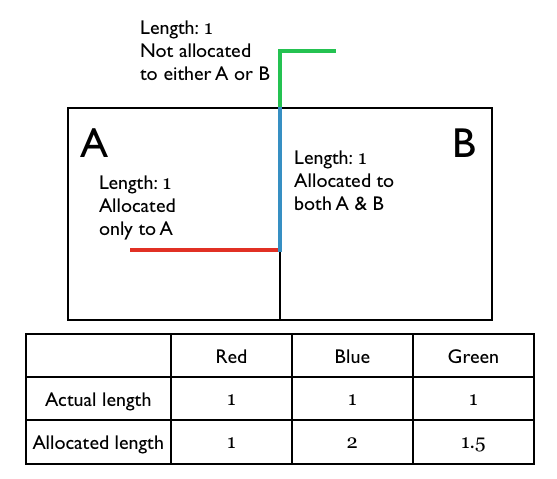 When calculating the lengths of lines (or number of points) remaining outside a intersected areas, we have the problem that lines can lie along the edge of two vector features, and hence the section of the line would be counted twice. If therefore need to adjust our formula for calculating the lengths (or number of points) outside an intersected area. The key insight is that we don’t want the actual remaining area, but the right relative remaining area - these value are all normalized to one anyway.

The formula for allocating lengths is therefore:

In the example above, the formula would give the answer 1.5:

The same procedure is followed for multipoints (geometries that have more than one point), except that instead of calculating lengths you just count the number of points.

Calculating area outside of intersections¶ 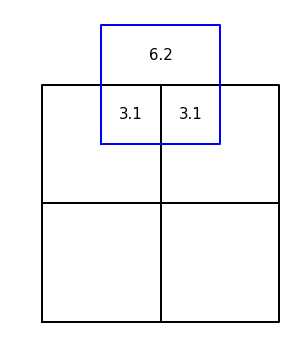 For many regionalized methodologies, it is important to know how much area/length from one spatial dataset lies outside a second spatial dataset entirely. The function calculate_remaining calculates these remaining areas.

Calculate the remaining area/length/number of points left out of an intersections file generated by intersect.

source_fp must be the first file provided to the intersect function, not the second!

Pandarus can calculate mask a raster with each feature from a vector dataset, and calculate the min, max, and average values from the intersected raster cells. This functionality is provided by a patched version of rasterstats.

The vector and raster file should have the same coordinate reference system. No automatic projection is done by this function.

Create statistics by matching raster against each spatial unit in self.from_map.

For each spatial unit in self.from_map, calculates the following statistics for values from raster: min, mean, max, and count. Count is the number of raster cells intersecting the vector spatial unit. No data values in the raster are not including in the generated statistics.

This function assumes that each smaller raster cell has the same area. This may change in the future.

Any additional kwargs are passed to gen_zonal_stats.

Output is a (maybe compressed) JSON file with the following schema:

Pandarus provides some utility functions to help manage and manipulate raster files. Raster files are often provided with incorrect or missing metadata, and the main pandarus capabilities only work on vector files. Unfortunately, however, many raster files require manual fixes outside of these functions.

new_fp: String, optional. Filepath of the raster to create. If not provided, the new raster will have the same name as the existing file, but will be created in a temporary directory.

band: Integer, default is 1. Raster band to clean and create in new file. Each band of a multiband raster would have to be cleaned separately.

nodata: Float, optional. Additional value to try when changing nodata value; must not be present in existing raster data.

Returns the filepath of the new file as a compressed GeoTIFF. Can also return None if no new raster was written due to failing preconditions.

The created raster file will have the same dtype, shape, and CRS as the input file. It will be a compressed GeoTIFF.

Returns out_fp, the filepath of the created file.

dirpath should be a writable directory. If dirpath is no specified, uses the appdirs library to find an appropriate directory.

band should be the integer index of the band; default is 1. Note that band indices start from 1, not 0.

The generated vector file will be in GeoJSON, and have the WGS84 CRS.

Because we are using GDAL polygonize, we can’t use 64 bit floats. This function will automatically convert rasters from 64 to 32 bit floats if necessary.

The software overlays (matches) two different maps, and Pandarus was a bit of a matchmaker himself. Plus, ancient names are 172% more science-y.

Pandarus can be installed directly from PyPi using pip or easy_install, e.g.

However, it is easy to run into errors if geospatial libraries like fiona, rasterio, and shapely are compiled against different versions of GDAL. One way to get an installation that is almost guaranteed is to use Conda:

You should replace <virtualenv name> with a name you will remember.

Pandarus is only compatible with Python >= 3.5. Source code is on GitHub.

Contributions are welcome via pull requests and issues on Github. Please ensure that pull requests include tests and documentation. Pandarus follows the Contributor Covenant code of conduct.